Bananas, roses, pieces of wood… do you have a strong connection with nature? Is any living yet perishable form a resource as far as your work is concerned?

It’s definitely more about the natural in conflict with the artificial. I don’t really think about the perishable. I think of my artworks more as a duality between the natural sensation and artificial associations. I would say there’s the real banana and next to it the artificial flickering one (Zebra Rainbow), well obviously there’s no such thing as natural but it’s more like the authentic, the traditional, the tangible. Moreover, it’s easier to relate to. Everyone can be, like, “oh yeah”. It’s not some very specific thing. That’s why I use bananas or roses or stones: you get it immediately, it’s not a very abstract reference.

Would you say that it’s a universal reference to which everyone can relate?

Not sure its a universal reference, maybe more so of a universal idea. Of how the norm is constantly replaced, and as viewers we get desensitised to what the « new » is or may become. I see these things every day, the things I reference in my work. We might not recognise a genetically modified banana, or incised asphalt as a redefined version of something else, even though it is.

You can see under the lights that they all return to being a brown log and obviously browns are very subtle. There is no definitive “one brown” but it kind of plays off that idea of a log is brown. I removed all the texture, which is an important thing, so you can’t see the surface. 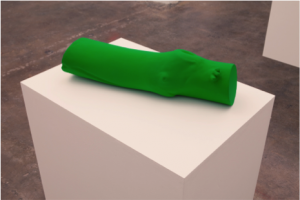 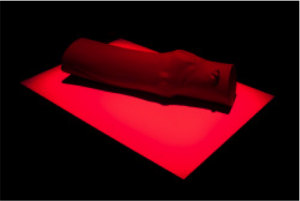 Did you also remove the texture from the paving stones?

Yes, it’s basically forms and lines that can give you the sense of something. I think that they even put an artificial texture in there which is interesting. I think they do… because sometimes you look at a lot of them and you can see scrape lines and it’s really shitty. But I’ve seen that they have a thing that they just press, I don’t know exactly but it’s too perfect : there’s no way someone did it by hand.

Why did you choose those particular colours for the stones that you created for Images of stones?

All of them are greys. I didn’t want it to be on the same level. I took each square and reduced it into one pixel with Photoshop. So this new grey is the visual blur of all the colours of the other three pictures together. Once created they are slightly different shades : one is a touch more red, and another one is a touch more this. Some of them you can’t even notice, and some of them you can see there is a lot of difference.

I would say that you are a bit of a scientist experimenting with all of the colours. Do you see your work as a scientific production?

No. To do what I’m doing, I’m using all the technical steps and technical thoughts of “how is this colour transformed, how is it perceived ?” but in the end I’m more interested just in how a viewer is perceiving it. To control someone’s perception of something very specific, I have to be a little bit of that. But I don’t want it to be what is important in what I’m doing or what seems interesting about it.

Yeah, I sensed that you were interested in the viewer’s view, because of that second view I have in front of some of your pieces of work. I first see the image, and then I feel like my view has changed and I can really feel the colours, I could understand the scale shift.

There’s definitively a part of that where – to give it a less scientific interpretation – you look at an object or an image and you’re unaware of something at first. Then, after a slow look or as time passes, it reveals itself. For example in Rose Image to Rose Powder, you look at it from the back of the room, then when you walk up you’ll see the vial hanging.

Exactly, and what appears to be a visual element which shows your process..

Yes, it’s like the way the video is composed is to show how it’s speeding up.

Would you say that Stop Thinking About That works only when it’s activated or does it need to two viewings?

At first I was thinking if it should be moving or not, but then I don’t think people’s imaginations could push that enough to see what the blur of the three colours create, so I have to do it. I feel that you have to see something. 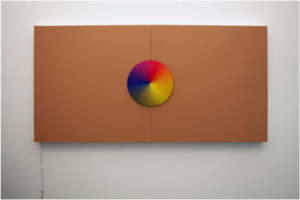 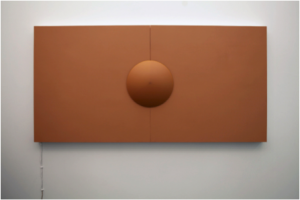 So, is the viewer really important for you?

I don’t think that I’m so much into the process as into the sense of time. If time has to be in the process, the fade line on Steph, Baby Steph, Steph’s Grandma would be the revelatory element of the process of “there’s something inside something”. Although if you’re not so aware of that line, it appears to be one thing. It is exactly the same for the disc: it could be one thing.

I‘m just more interested in collapsing the time or the space: when the disc spins, the rectangle collapses.

I don’t know if someone is watching… maybe you could answer me this : do they think “this is the process” or is it more of an awkward sense of time passing, or both? The one I’m more after is the second. 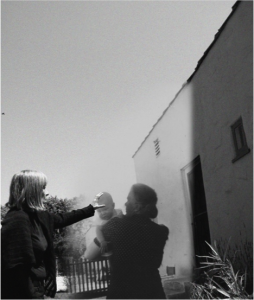 I feel that everything is fading. I think it’s like when you’re hypnotised or when something really impresses you and time doesn’t matter anymore.

Yes, exactly, there’s always a blending. In Images of Stones it’s more about the material fading but there’s also that sense of time materiality.

About the stones, do you think that being in Paris changes your perception or something in your work ?

I’ve been here for a year and a half now and I’ve never thought of doing anything “for Paris”. I just notice things differently, seeing new things, even day-to-day life, the way you do things…

I noticed that most of your artworks are one object or several objects but working together in one installation. Do you think that you could apply the protocol of your other pieces to make serial artwork? Or are you maybe attached to the “unique piece”?

Usually I’ve got an idea that I produce, and if I’m satisfied, then I move on. If I had to produce more work, if I had to, for example, fill more space for some reason, I’d probably do series. The idea of re-creating the same thing in different ways could be really great because you’ll get a better sense of it through doing different tests, compositions and forms. I like the idea of re-doing works but I haven’t had the time.

Maybe you have a general idea and you don’t do proper series but it’s serial thinking, using one kind of technique and one installation. You don’t have an iconography, every work visually isn’t the same as the others.

I think the question is more about being intuitive when you work. There is stuff that is intuitive in this but I don’t think that you see it in the work, directly. I feel that it’s always the idea being connected through all of it. But actually, I do feel the need to try making editions, just different forms of the same thing. I think I try to leave myself time between works: I think I slowly revisit an idea.

As for the “unique piece”, each of your projects is defined in one medium, (photography, installation, painting), why don’t you create links between them?

A lot of people need to classify things, but things can be in between things. With The Orange Sky and the Brown Blueberries, if you light a red object with green light, it’s brown. It just depends on other factors : for example if this disc (Stop Thinking About That) is spinning, it’s not red, blue and yellow. Movement can change a colour, it’s more the belief that nothing is ever still.